After announcing the ADS-B filter we receive some inputs asking for other type of the filters. One of them is filter commonly used by the Radio astronomers for monitoring the Hydrogen line signals around 1420 MHz.
The filter described is made using the LTCC technology and is a compromise, same as the ADS-B filter. 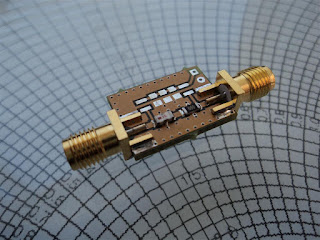 The filter is built around the same PCB as the ADS-B filter using the 1.6mm FR-4 substrate and the same layout. The only difference is that there are no preassembled Bias-T parts leaving this option to buyers to complete if they need it requiring only one coil and three capacitors. The filter response is not so sharp and has the same characteristics as the ADS-B filter using the LTCC technology. The insertion losses on 1420 MHz are not so high, measured 2.5dB with the descent rejection of the unwanted frequencies. The real measurements match very closely to the designed ones and on the next diagram the red curve represent the shape and the characteristic of the 1420 MHz H-line bandpass filter. 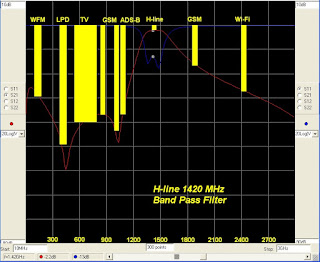 The filter is designed to pass the 1420 MHz with the lowest insertion losses and at the same time to attenuate all other frequencies. he amount of attenuation is represented by the yellow bars. The longer bar - the higher attenuation. Vertical scale is 10dB/div and horizontal 300MHz/div.

This filter is not designed to be a very first (front end) part of your receiver chain but it can be used just between the LNAs you are using. If the system is suffering from the strong TV, and GSM signals this filter can help you to get rid of this blockers a bit.