Decoding the data coming from the birds transmitting on the L-band became a new "sport" for cohort of the DVB-T dongle users, and not only. Tweaking the equipment for the best reception has always been a goal, mainly for the advanced users. Getting many requests for this kind of the filter I decide to compile a quick and short batch of the L-band SAT filter. 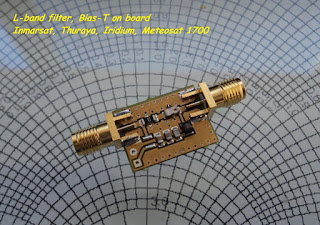 The main idea was to bring a small filter, with a descent bandpass shape and not big insertion loss. The filter using the same PCB as my other filters and the bias-t can be added (DIY) on the same board as well. Here is the simulation of the proposed filter. S2,1 and S1,1 can be seen on the graph together with the markers indicating the losses on a few spots of the interest. 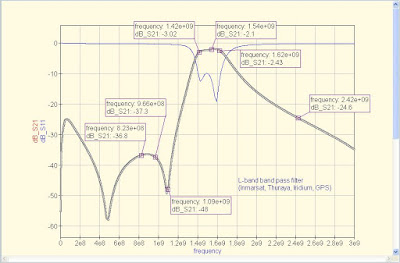 Simulation showed a pass band -3dB bandwidth of 200kHz where most of the satellites are covered. The same filter can be also used for the Hydrogen line reception with a bit higher I.L. but still good for the second stage filter, running after the LNA frontend. The same filter can be used for Inmarsat, Thuraya, Iridium, GPS reception. Rejection of the out of the band signals is better on the lower frequencies, bellow the 1.3GHz. Rejection of the ADS-B radars, 965MHz cell, 825MHz LTE, TV and radio band is really good.  The rejection of the higher frequencies, 2450MHz Wi-Fi  is a bit lower but still good. The cell towers on 1.8-1.9GHz are not attenuated so much but still, 12.5dB, better than nothing. The simulation looking nice, but let's face the real world: 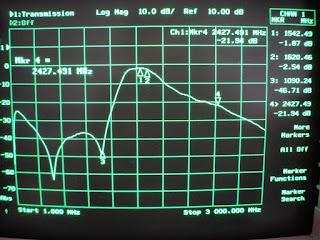 The S2,1 results are very close to he simulation. There is a small difference and the ripple in the 1.8-1.9GHz and the Wi-Fi 2450MHz region just because I had my mobile phone in the pocket, and Wi-Fi running on the same PC. The markers on the graph are clearly showing the I.L. on the 4 frequencies. For the guys that are not so friendly with the graph here are some figures, losses at the certain frequencies.

Within the 3dB we have all satellite L-band channels and also the H-line frequency. The filter should be used after the LNA but if the strong blockers are present then the filter can be placed before the LNA. This will increase the noise figure for the insertion losses value but even this is small comparing to the bare DVB-T dongle noise figure. The users in the remote areas will not benefit using this filter but the users in the urban areas and close to the radio and TV towers may experience a big difference using the small filter described in this post.

The S1,1 or the RL in the passband can be seen on the following picture. Again, the real measurements are very close to the simulations. The simulations were done using the manufacturer S2p available data, so not including the SMA connectors nor the FR-4 1.2mm PCB. 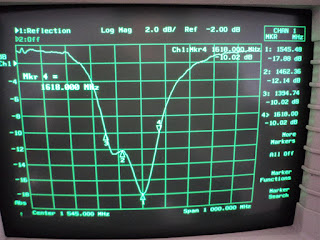 Same  as the latest ADS-B filter, also this one comes with the Bias-T circuity on board. You can use the advantage of this feature and power supply the remote LNA placed on the antenna using the same coaxial cable used for the signal. The passband characteristic can allow also meteosat reception on 1700MHz with a bit higher I.L. but if remote LNA is used then this should work also OK. Check the measurements on the following video:


How does it perform in the "real life" check on the following video. Very common setup consisting of a simple antenna for the L-band and two LNA4ALL. In between there is a L-band filter.


We have this filters available with or without SMA fitted. Price 18 or 20 Euro, each.